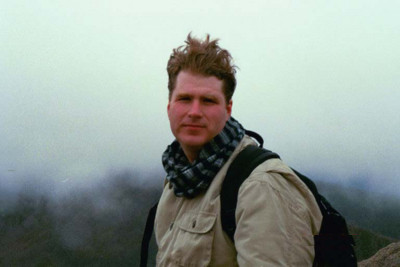 This is the last photo of me before I went blind on the mountain.

Despite the summer, Ben Macdui was so tall that it was below freezing when I finally reached the top. On the long walk up, it had snowed and the sky was thick with clouds. I was only prepared for a short day trek. I had no flashlight, and no food or water. I had no map or compass, and hadn’t seen a soul in hours. I had no phone. My American cell phone would not have worked in Britain.

I was panting heavily, having pushed hard to reach the peak before sunset, and failed. I allowed myself to collapse to the ground. From there I looked up at the heavy blanket of clouds overhead. There was no hint of moon or stars. Having blue eyes made me especially sensitive to bright sunlight, and I could see well at night. But now a half hour after sunset, the sky approached total darkness. Moving had been keeping me warm, but soon it would be too dangerous to walk. I would be stuck for the night without a tent or foliage for shelter. If I found the way back, a half mile of boulders as large as deep freezers lay between me and the parking lot.

It should have been impossible. Think back twenty years to the age before the Web. Nobody had a cell phone. This was 8 years before Friendster, the stupid early version of Facebook.

It was mind over matter. If I couldn’t push my way out of this, this could be the end of Johnny Monsarrat. So I rose and started the path back. As darkness closed in, it gave new meaning to the phrase “watch your step”. One misstep could mean a broken ankle. But it was a 4-hour walk down, and I would go blind in 90 minutes. I began to run.